This is part 2 of our 4 part installment of the shenanigans Aleah and I get up to while abroad!

In Offenbach, Germany, a town 6 miles outside of Frankfurt, lies Schultheis-Weiher, or Schultheis Pond—both a recreational swimming area and a nature preserve surrounded by beautiful, amber farmland. While in Frankfurt, our host took us to this lake, and the walk there made me question the whole time, can America really claim amber waves of grain?

If the “roads” line from Blowin’ In The Wind doesn’t pop into your head when you see this picture, then who are you?

Although the Pond itself is beautiful, filled with exotic birds and wildlife that roam its nature preserve section, the true excellence of the trip came from walking from Frankfurt to Offenbach, and walking through the fields—scrapes, small cuts and mosquito bites be damned!

If you look closely, in the upper, left hand corner of the photo, you can see a beautiful, little clump of red flowers singing out from within the amber.

On our walk, when we first came to the fields, we considered walking around them because the grain had grown extremely high and we didn’t know what was in there, but then we decided, “Hey, we’re backpackers, this is what we’re made for!” and walking through the farm fields was one of the best decisions of our trip. For acres and acres all we could see was beautiful amber grain fields, speckled every once in a while with purple lavender, or red flowers, adding flares of color for the eye to grasp on to to make sense of it all.

And if the view wasn’t enough, as we walked, the sun set. I want to share pictures below with you that show the difference in scenery throughout our walk, from the time the sun was in the sky, to when it began to set and sigh slight shadows over the fields. 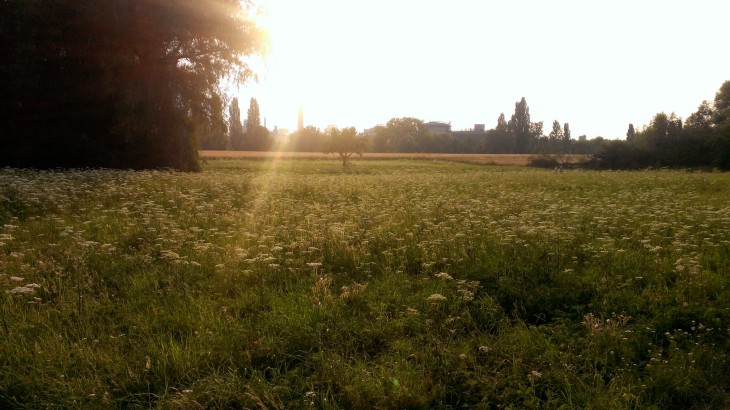 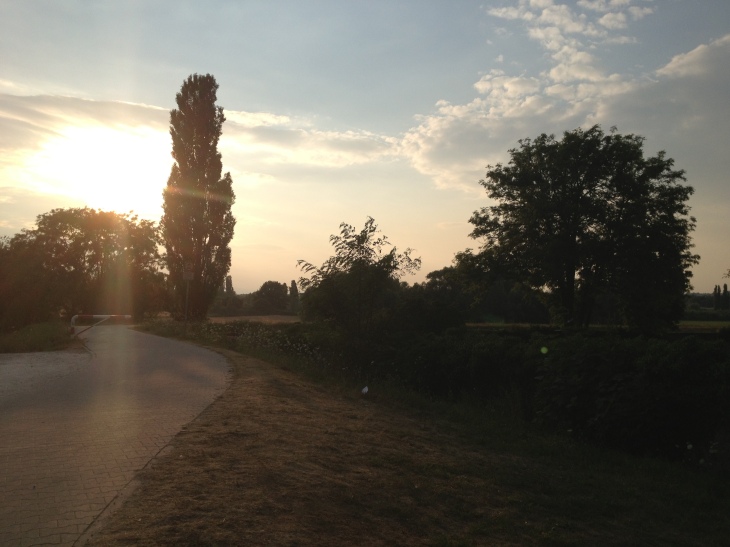 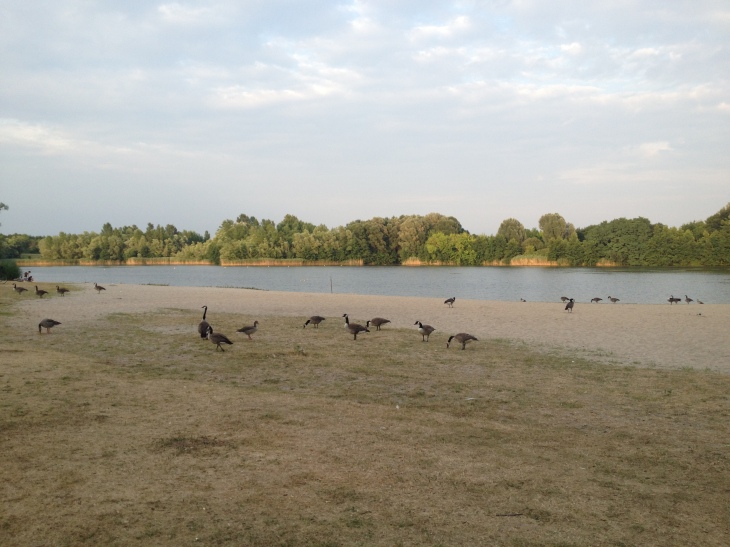 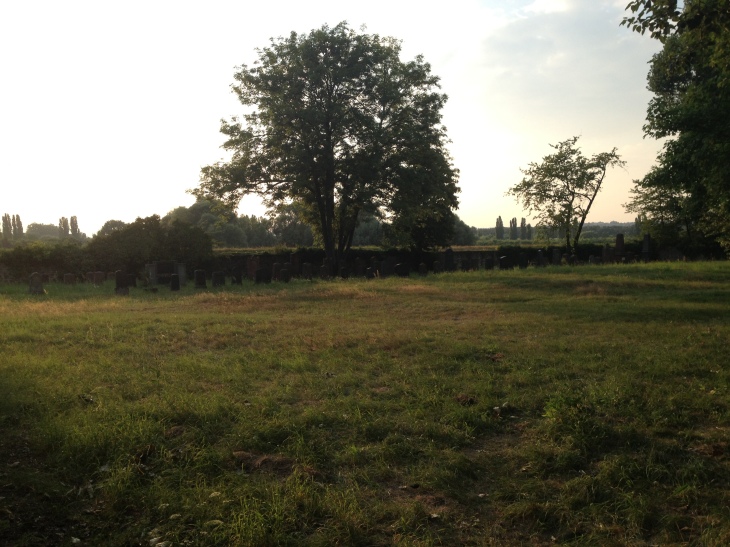 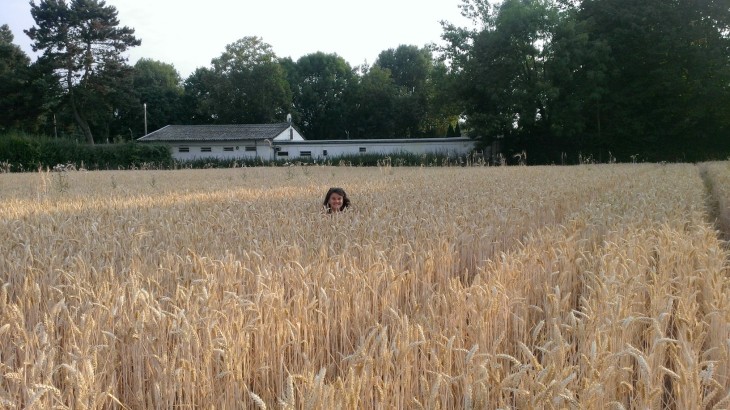 And, of course, I have to end it with the quintessential photo it is incumbent upon someone so completely surrounded by tall grain to take.

Walking through the streets of Germany, I couldn’t help but notice the attention to detail German street signs have. In America, the stick figures on our street signs, or bathroom signs are pretty boring. But in Germany, not only do they have a sense of style, but they seem to also have a personality. Here, let me show you…

The sign showing that it is a pedestrian area shows a man—who is extremely well dressed and wearing a hat, for chrissakes—perhaps in the middle of a game of hopscotch?

This isn’t necessarily a street sign, but it’s kind of hilarious. This is a sign at the top of the Berlin Victory Column asking people not to draw graffiti or deface the top of the column in any way.

This man, showing pedestrians they have the right to cross the street, is wearing a hat. Awesome. 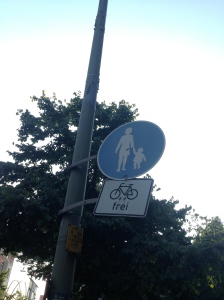 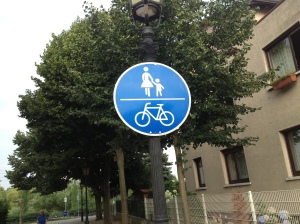 This mother is wearing an awesomely poofy dress. I like her fashion sense.

This light letting pedestrians know they may not walk looks like a Thai man holding his arms out ready to hug me. It’s hard not to want to run across the street and hug him right back!

This woman’s bathroom sign shows another smartly dressed woman with a great hairdo. You can even make out the contours of her face! The Germans are nothing if not thorough. 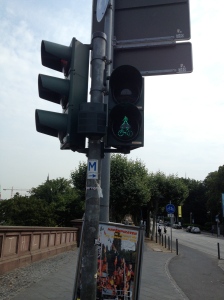 This light lets pedestrians and bikers know they can cross, but it really just looks like an athletic dude standing on the handlebars of a moving bicycle. Equally cool!

I guess this sign is telling us to take “caution” in case rogue dogs attempt to infiltrate the bus from the roof mid-ride and take over the city.

This pedestrian man has interestingly angled, curved and pointed feet. His mother must have been a ballerina and his father must have had clubbed feet…

While Aleah and I were in Europe, we noticed something: there were a lot of really, really long escalators.

Clearly, it was really fun.

HOWEVER, when we arrived in Germany, our host in Frankfurt, unprompted, brought us to a cool shopping mall called MyZeil, and when we entered the mall, he said to us, “Want to take a ride on the tallest escalator in the 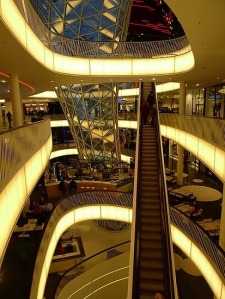 world?” Aleah and my jaw dropped.

“You’ll never believe this, but…” then I filled him in on our running joke. The escalator was, in fact, huge, but I was skeptical: what were the odds.

I mean, the escalator is a bit intimidating, but it’s not this scary, don’t worry.

don’t have a fear of heights, but if you do, this escalator isn’t for you. But don’t worry, there are much smaller escalators that only span over one floor surrounding this behemoth of an escalator, so you won’t be confined to the stairs should you visit MyZeil.

Later on in our trip, in Prague, Aleah and I were using the Prague metro, and we were confronted with another extremely long-looking escalator. “Okay,” we thought, “this one seems a lot longer than the one our Frankfurt host showed us….what gives?” I finally was compelled to do a bit of research.

Here are some fun escalator facts for you, in case you want to turn your European backpacking trip into a tour of Europe’s most outstanding escalators. (**These almost might clear up the slight misconceptions we’d had about the leading European escalator giants earlier.)

The first sign I saw when I arrived in Amsterdam.

Call me uninformed, but before I arrived in Amsterdam, I used to associate the city with marijuana and prostitution. I thought those were the main things Amsterdam had to offer. Within mere minutes of arriving in the beautiful city, it was clear that I was wrong. The Red Light District is but a small—almost insignificant—aspect of this beautiful city. After spending a few days in Amsterdam, I’d call it a less smelly Venice.

The center of the city is basically just a bunch of streets built in between beautiful canals. The streets are very narrow

and cobblestoned, which makes the fact that everyone—and I mean everyone—uses bikes a bit more dangerous. When Aleah and I first arrived in Amsterdam, we were told by our host that we were not to walk in the bike lane, because a bike lane in Amsterdam is the equivalent of a rush hour highway in Los Angeles. There are hoards of people on their bikes trying to get places, and it’s a huge city. Just because someone is on a bicycle doesn’t mean they’re going to be any less rude in traffic.

Bikes and canals—what this city’s all about!

bikes around the city like locals. After riding our bikes around for one afternoon, we agreed that that was the last afternoon we’d ride bikes in the city. If I thought navigating through traffic was scary in a car, it’s nothing compared to doing it on a bicycle seat. In Amsterdam, the drivers are rude, AND the bike riders are rude. Aleah and I were on bikes we’d never ridden before, and we were trying to get adjusted to the traffic signals, street signs, road markings and our own bike’s gears and breaks, and every time we made a mistake, we’d nearly be clipped by an oncoming biker, yelled at by an oncoming driver—or both at once! The moment we set our bikes down and decided to walk through the city, we noticed just how beautiful it is. The moment I

After I locked up my bike, I took this picture.

locked up my bike and turned around, I noticed how lovely all the streets and canals are because I wasn’t focused 100% on keeping my head attached to my body. If you’re a tourist looking to see Amsterdam, DO NOT get a bike. Unless you already know the streets, the customs and the bike you’re using really well, you’ll enjoy the city much more on the ground rather than on a bicycle seat. I promise.

When we were finally ground-borne, we walked around the city and saw canal after canal after canal. Each block comes complete with its own lovely canal that luxuriates as far as the eye can see. The one downside: there are a lack of benches lining the canals. Each block only has about two benches on each side, and sometimes the benches are owned by local businesses who put signs on the benches letting tired pedestrians in search of a good view know they should keep searching.

An alley way filled with hookers to your heart’s content!

The calm tranquility of De Negen Straatjes (The Nine Streets—the downtown area with a lot canals) juxtaposes so jarringly with The Red Light District though. After spending a morning ambling along the canals, I walked over to The Red Light District just to see what it was all about. I had to switch sight-seeing modes immediately from relaxed and introspective to street-smart and self-preservatory. Even at noon, with the sun high in the sky, The Red Light District is as lewd and crazy as you might expect it to be. New York City might have to relinquish its title as the city that never sleeps. This district is so unabashedly proud of its reputation that many businesses are named after its more subversive elements. I made the mistake of 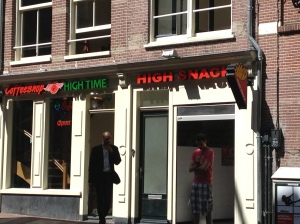 seeing The Red Light District on my own, and I even felt uncomfortable walking around there in the pure daylight as a solo female traveller. If you are a woman traveling on your own, I suggest you do not go to The Red Light District on your own around or after sunset. Coming from a country where prostitution is illegal, it was very strange to see street after street with scantily clad women of all kinds standing in doorways offering themselves up to the lascivious men walking by and enquiring. I didn’t—and still really don’t—know what to think of it! I’m still trying to decide whether or not its empowering for females 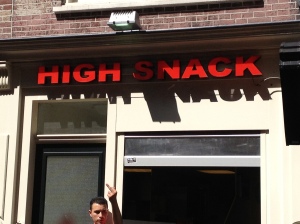 See that guy flipping the bird there? I didn’t even notice I got that in the photo until I looked at it days later! But that’s The Red Light District for you!

to become prostitutes in a well-regulated system like one The Red Light District boasts. The eternal question still endures: if it’s what they like doing, then who are we to tell them they shouldn’t? After the 45 minutes I spent in that area, I decided it was more than enough and made my way back to the ethereal canals. Those suited my tastes much more.

Anyhow, I’d like to end this blog post with a lovely picture of this beautiful city, now that I’ve shared with you some of the creepier aspects of it. Don’t get me wrong, Amsterdam is one of the more beautiful cities I went to, and I’d love to go there again. Just next time, I might avoid the Red Light District entirely.

Amsterdam, with Bikes and Canals!