The beauty behind the Eurail pass that you might not think of immediately (which I know I certainly didn’t) is that it allows you 10 travel days, not travel experiences. For instance, for any one of my 10 days of travel within those 2 months, I could take as many train rides as I wanted, and I could stretch out that 24 hour time frame as far as it would go.

And I did. That meant, for me my travel partner Aleah, that planning how we got from A to B could and would include potential Cs, Ds, and maybe even Es!

The travel day allowed us to have whirlwind afternoons in cities that weren’t originally on our itineraries, but, through meticulous travel day planning, we were able to visit.

Now, I’m not saying that you’ll be able to do this on every travel day you have.

Sometimes, the places you’re trying to get to and from are simply too far away and leave no time for sightseeing in between, or the train routes simply don’t go to the cities you’re interested in seeing. For example, Aleah and I tried (I think, for a good hour) to find a route on a travel day that would take us from Vienna, Austria to Berne, Switzerland and allow us to see Munich, Germany in between. Sadly, though, because of the train arrival and departing times, it simply was not in the cards for us.

However, sometimes our travel-sightseeing days worked out in our favor, and my 2 favorite trips particular were as follows.

1. Our stop in Bruges, Belgium on our way from Brussels, Belgium to Amsterdam, Holland. 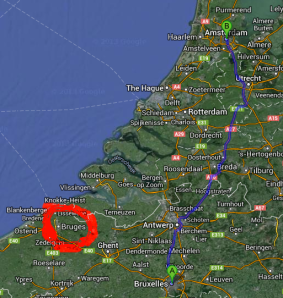 Now, as the map to your right will show you, Bruges is not necessarily right on the way to Amsterdam, but the distances between all the city were so small that the time in transit didn’t take much from our travel day, and we were able to spend an entire day in Bruges, pretending we were in the movie “In Bruges”.  Here is a montage of the highlights of that day. Gosh DARNIT Bruges is a beautiful city!

Bottom row, middle: beer from the elusive De Garre bar—the only bar in Europe that serves De Garre beer, and believe me, it’s worth the search. The beer is paired with Gouda cheese and rightly so. It’s a match made in Bruges. Bottom row, right: the latest touristy thing to do in Bruges is to find this frog on the back of a bronze statue and kiss it. Clearly, we did. You should, too.

2. Our stop in Bratislava, Slovakia on our way from Prague, Czech Republic to Budapest, Hungary.

The amount of times we’d been told to stop in Bratislava, Slovakia became overwhelming and so, we decided we had to stop there since it was literally directly on our way from  Prague to Budapest. And what a lovely city Bratislava is! We had 4 hours in Bratislava and, strangely enough, we spent about a quarter of it (a full hour, that is) on see saws. Highlights are below.

Upper left: Bratislava has many quirky statue, and here I am standing on top of the most famous one entitled, “Cumil, the man peeking out from beneath a manhole cover”; Upper center—Look! They’ve got a White House too! This is Grassalkovich Palace, where the President of Slovakia lives!; Lower left—Aleah in front of the Bratislava opera house!; Lower center—there it is! The see-saw! See? Saw?; Lower right—Old Town Bratislava.

Yes, yes, Eurail travel is extremely rewarding, but making the most of your travel days is quite tiring. Exhibit A:

The traveler rests in between destinations.

One thought on “Eurail Passes: Getting the most Bang for your Buck out of your ‘Travel Days’”